Switzerland is small, landlocked country in the heart of Europe. It is densely populated with citizens rich in wealth, good life and health, and blessed with longevity. Despite the fact that the country is divided into 26 cantons, that there are four official languages, and that the citizens don’t share a unique ethnic identity, they are all linked by common historical background and federal system of direct democracy.

Swiss society is clearly complex but well organized. Apart from high prices, the first impressions of Switzerland include safety, cleanliness and efficient infrastructure.

The Swiss are known for their reserved, extremely organized nature, and strict adherence to a set of unwritten social rules for daily life everyone is expected to follow. On the other side, their considerate behavior shows their awareness of others and will to help.

Switzerland is well-known for its mountains, watches, cheese, and chocolate. But not many people know that the world owes it some of the life-changing inventions:

But did you know that if it weren’t for Switzerland, more precisely its city of Geneva, you wouldn’t be able to read this blog now? Why? Well, because the World Wide Web was created in Geneva in 1989 by Tim Berners-Lee at CERN.

Geneva is the second-most populous city in Switzerland. It is placed on the shores of Lac Leman, the largest European alpine lake, at the point where River Rhone outflows from it. Having France for the first neighbor had an impact on the official language spoken in this canton. However, in the streets of this smallest metropolis in the world, your ear can catch multiple languages and dialects being spoken.

Geneva is a worldwide center for diplomacy due to the presence of numerous international humanitarian and peace-building organizations. Being home to the International Committee of Red Cross, World Health Organization, United Nations headquarters, Doctors without Borders, Interpeace, and many others made it worldwide known as the capital of peace.

Geneva is certainly worth visiting. As it is an upscale and imposing place, afford yourself a journey in the same manner. Organize a limousine hire to wait for you at the airport or station and follow our list of the top 5 places in Geneva for an unforgettable experience.

At the end of the 19th century, Gustave Revilliod, a world traveler and great collector, built a museum on his property in Geneva to house his encyclopedic collections, which he named Ariana in honor of his mother.

He never married so he left the building and its collections to the City of Geneva “as a credit to our country and to benefit the artistic education of future generations“, along with the extensive parkland that then reached down to shores of the Lake Geneva, & a substantial part of his fortune. The Ariana Museum is now a municipal property known as the Swiss Museum of Ceramics and Glass.

Near the Park, there is a big square covered in granite slabs, in colors symbolizing the diversity of nations.  Nice refreshment comes from a dozen of small water jets shooting up from the ground. In the center of the square stands a huge “Broken Chair” commemorating victims of mine disasters. The square is home to many international organizations.

The most popular one is the headquarters of the United Nations, with an imposing entrance lined with flags of its 192 member nations. There are organized group guided tours so the place is always crowded with curious tourists. 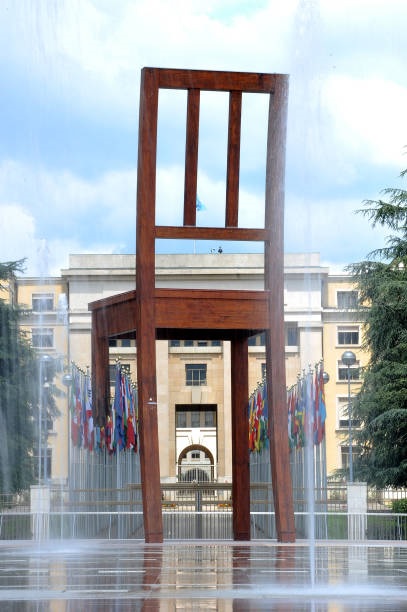 Broken Chair in front of the UN

Within the park, there is a number of interesting monuments. The best known is the huge – over 4 meter in diameter – donation by the Woodrow Wilson Foundation, the Celestial Sphere. Known also as the Woodrow Wilson Memorial Sphere of the Palace of Nations, it is today a symbol of Geneva as the center of dialogue and peace.

Another advocate of peace sits in the Park, promoting the peace, harmony, and friendship between India and Switzerland. The statue of Mahatma Gandhi sits cross-legged, reading a book in his lap and sending the vibes of peace and serenity. 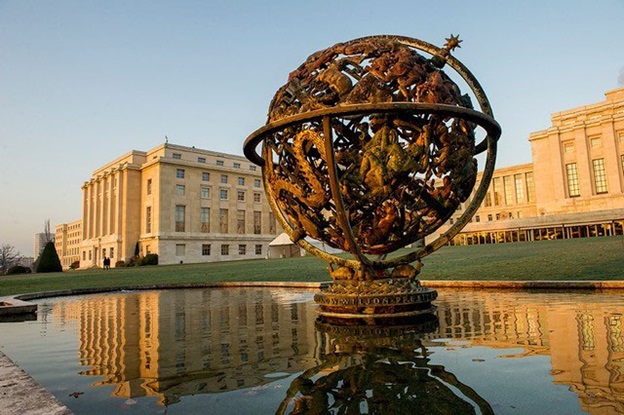 One of the most beautiful buildings in Geneva is built on the ancient site of a Benedictine priory in the upper part of the Eaux-Vives district. The Russian Orthodox Church is a genuine masterpiece of Byzantine-Muscovite style. Tsar Alexandre the first’s sister-in-law, Anna Feodorovna Constancia, financially supported the construction of this church in the second half of the 19th century. Church’s extraordinary golden onion domes can be seen from miles away, like glowing candles. On a clear day, you can see them sparkling even from Nyon, about 20 kilometres from Geneva. 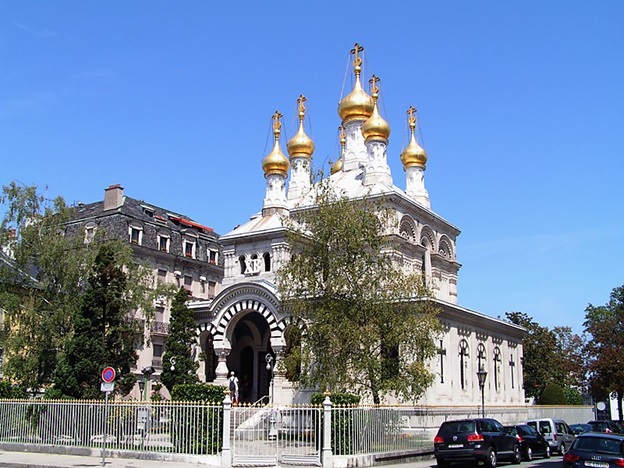 The church features Icons, impeccable pieces of art from the 16th to the 20th century, as well as various treasures belonging to the Russian imperial family. The interior is made from the black wood, making them all stand out in an impressive way. Apart from domes, exterior features the Byzantine-style striped arches and grand stained-glass windows. Given its beautiful and unusual architecture and rich history, the Russian Church of Geneva remains a popular tourist attraction in the city.

The church is located between the Old Town and Boulevard des Tranchées and is open to the public. It serves not only the Russian community but also Bulgarians, Serbs, Coptic Christians and other Orthodox worshippers who do not have their own church in Geneva. Although photography inside the church is not allowed, its exterior is highly photogenic and will transport you to another time and another place in an instant.

Interesting design and significance of this institution are very attractive to even those who are not that into science. One of the best-known symbols of the European Organization for Nuclear Research (CERN) is the Globe of Science and Innovation. Its spherical shape represents our planet Earth and is a unique landmark by day and by night. Built from a variety of trees from Swiss forests that absorb more carbon in their lives than they release, the building acts as a carbon sink and symbolizes sustainable architecture. 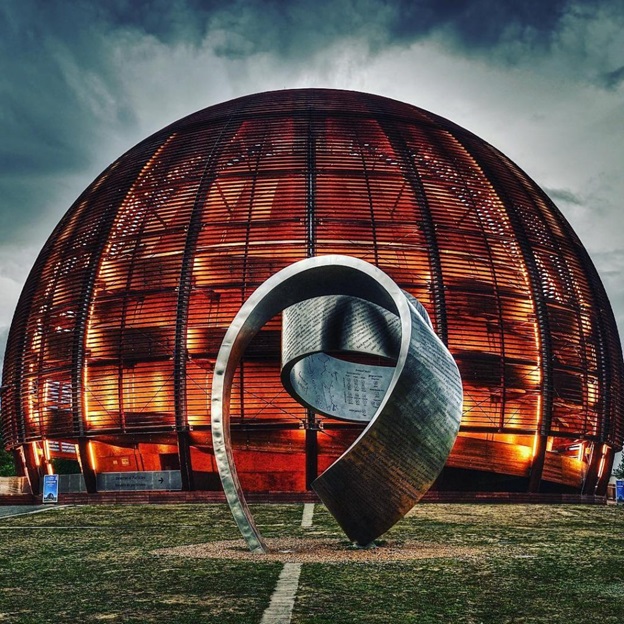 Place to visit in Switzerland – Cern

“Wandering the immeasurable” stands in front of the Globe, taking the breath away even from afar. It is the 15-tonne steel sculpture shaped like a ribbon that twists 11 meters in the air. If you look closer, you will find equations and symbols engraved for good. The sculpture pays homage to great past and future discoveries in physics and symbolizes dissemination of knowledge.

The other monument near CERN will leave you puzzled – a gilt statue of Nataraja who dances away the illusory world transforming it into power and enlightenment. In Hinduism, Nataraja depicts the god Shiva who represents the creation of this world and its apocalypse. A deep understanding of our universe is hidden in God’s endless dance of creation, preservation, destruction, and paired graces. The statue was a gift from India to honour the long-lasting Indo-Swiss relationship and it represents CERN’s study of the “cosmic dance” of subatomic particles. 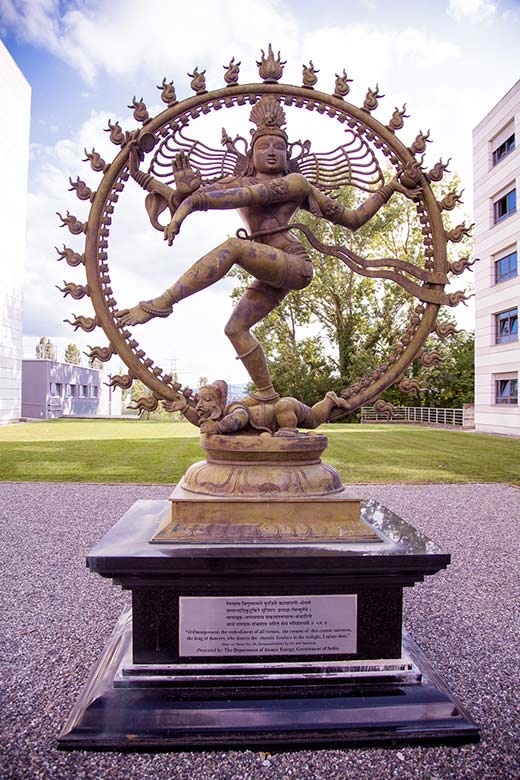 After the tour around CERN, you’ll need some time to process all the information received. To summarize your impressions and relax, go on a limo ride to small villages and towns around Lake Geneva. Nyon, a small historic town with the chateau, Roman monuments, and a few museums, might be your first stop. The best-known landmark is the characteristically white Chateau de Nyon which houses the Historic Museum with Porcelain Exhibition. On the roof area of the castle, the museum preserved the original prison cells that were used up to 1979. Go all the way up to the terrace of the castle to enjoy grand views of the Rive district, Lake Geneva, Yvoire, the French Alps, and on a clear day Mont Blanc. 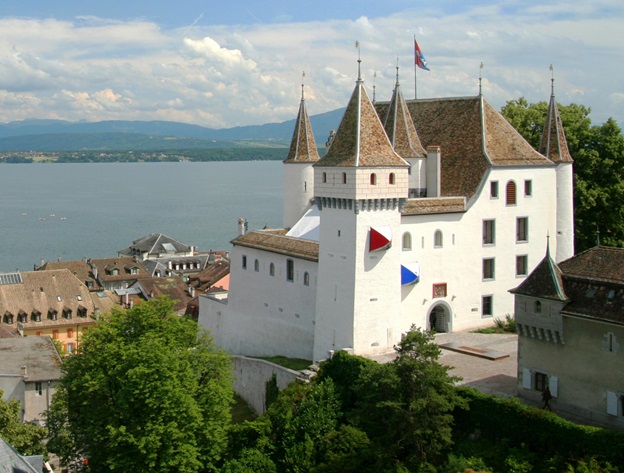 From Nyon to Morges extends one of the biggest wine-growing areas in Switzerland – the “La Côte” region. Morges is a lovely town between Geneva and Lausanne that once upon a time was an important commercial centre. The cobblestone promenade along the lakeshore stretches from the castle all the way to the Vertou Park. It lines with cafes and shops and offers a fantastic view of the lake and Savoy Alps.

If you happen to be an admirer of the 7th art, your next destination should be a small town of Vevey. Former Charlie Chaplin’s mansion, in which he had lived after he was exiled from the USA, has been turned into a museum to this great comic actor and film-maker. In Chaplin’s World, you can take photos with realistic wax figures of Chaplin and his famous contemporaries. The museum is interactive and provides its visitors with a unique opportunity to try themselves as actors. The entire Hollywood film stages have been replicated in the original scale. It takes one brave person to jump into the scene and the entire museum comes to life. 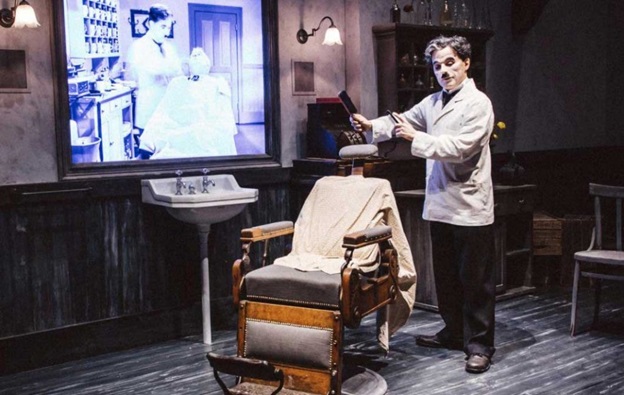 One cannot simply visit Switzerland and miss going to some of its majestic mountains. There are lots of attractions and activities to take in even during summer. A funicular rail ride from Vevey will take you 700 meters above Lake Geneva to the Mont-Pelerin over the Chardonne vineyards. The route starts above the Chemin de la Maison Jean and takes you through the forest to the Mivy plateau. After a climb to the Chalet de la Moille, you will be rewarded by the view of the Fribourg pre-alps. 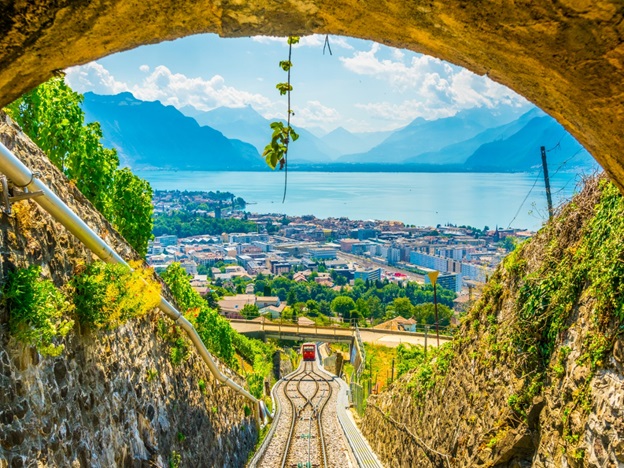 At the foot of Mont-Pelerin, you can visit the famous “Plein Ciel” telecoms tower. From the 64 meter-high viewing tower platform you can enjoy a 360° panoramic view of the pre-Alps of Freiburg and Vaud and have views over Lake Geneva as far as the Jura. On a clear day, you can even see Grand Combin Mountain, the jewel of the Valais Alps and the second highest peak in Romandy. 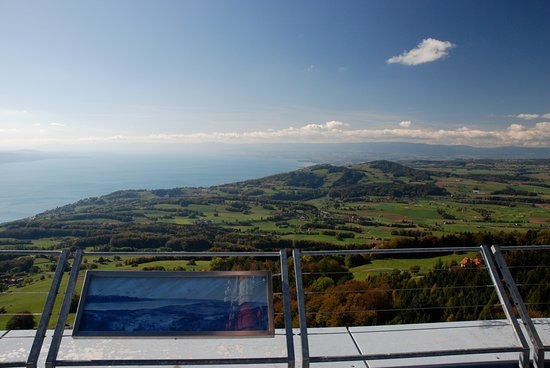 The view from the TV tower

Swiss roads are among the best in the world and all places are well connected. For the smoothest and most enjoyable journey around the country, treat yourself with a limo ride. Just imagine, a chauffeur waits for you at the airport, helps you with your luggage, takes you to your hotel to refresh and then off to your planned itinerary. You don’t worry about the traffic, road regulations, missing directions…you just lay back in a leather car seat and enjoy the views. You have only one life, if not now – when?

How to Plan Your Perfect Barcelona Tour?